We are very pleased to welcome Dr. Latham Boyle to York as this year’s keynote speaker. Please join us for his talk during the conference on Wed May 15 at 11:00am in LSB 105. Lunch will follow for all attendees at 12:00 in LSB 106.

Dr. Boyle is a faculty member at the Perimeter Institute for Theoretical Physics and will be sharing some fascinating ideas coming out of his current research.

Abstract: I will introduce our recent proposal that the state of the universe does *not* spontaneously violate CPT. Instead, the universe after the big bang is the CPT image of the universe before it, both classically and quantum mechanically. The pre- and post-bang epochs comprise a universe/anti-universe pair, emerging from nothing directly into a hot, radiation-dominated era. CPT symmetry selects the QFT vacuum state on such a spacetime, providing a new interpretation of the cosmological baryon asymmetry, as well as an economical explanation for the cosmological dark matter. Requiring only the standard three-generation model of particle physics (with right-handed neutrinos), a Z_2 symmetry suffices to render one of the right-handed neutrinos stable. One can calculate its abundance from first principles: matching the observed dark matter density requires its mass to be 4.8 x 10^{8} GeV. Several other testable predictions follow: (i) the three light neutrinos are Majorana and allow neutrinoless double beta decay; (ii) the lightest neutrino is massless; and (iii) there are no primordial long-wavelength gravitational waves. The proposal also has interesting things to say about the strong CP problem and the observed electrodynamic arrow of time. 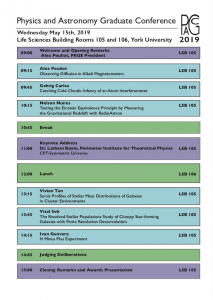 The annual PAGE conference is an opportunity for students in the department to:

All are welcome to attend and lunch is provided for all. You can find out more about the conference here. Also, prizes are awarded to the best speakers.

The next Conference is schedule for Wednesday, May 15, 2019.

If you are interested in participating, please send an email to page@yorku.ca.

Hope to see you there!

A cool event is coming up this week, planned by the Faculty of Science,  “Science Unplugged”. It is intended to be a faculty-wide internal event to bring together faculty members, postdocs and graduate students. The primary goals are to build a stronger sense of community and foster cross-disciplinary interactions. It’s meant to incorporate both intellectual and social aspects. The idea evolved, in part, from the faculty’s strategic planning consultations. This event will feature three short TED-style talks to generate excitement, one of them given by yours truly! There will be free food and refreshments too.

Registration is encouraged for this event, so please do so at the following link:
http://science.apps01.yorku.ca/machform/view.php?id=59344

Hope to see you there! 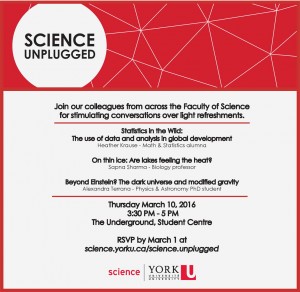 This year’s Physics and Astronomy Holiday Party will be a festive lunch on Dec 14. Free lunch, drinks, prizes and festive physics cheer for all. This is a nice chance for the department to come together to celebrate the end of term and the beginning of the holiday season. If there is one day to be on campus in December, it’s on December 14th. Don’t miss it! 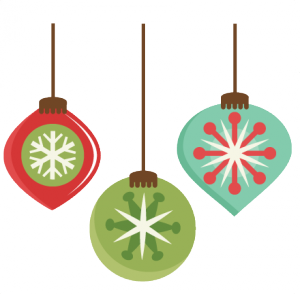 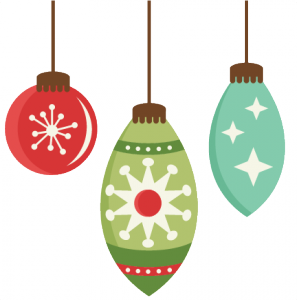